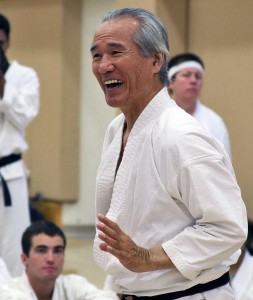 Monte Sano Shotokan is affiliated with Shotokan Karate of America (SKA), which has been teaching karate in North America since 1955. We practice a traditional form of karate that was the first introduced to Japan in 1922. Our chief instructor is Mister Tsutomu Ohshima, the founder of Shotokan Karate in the United States. Our dojo head instructor is James Blackmon, Sandan (3rd Degree Black Belt), who became one of Mr. Ohshima’s first karate students while he was studying at Cal Tech in the late 1950s.